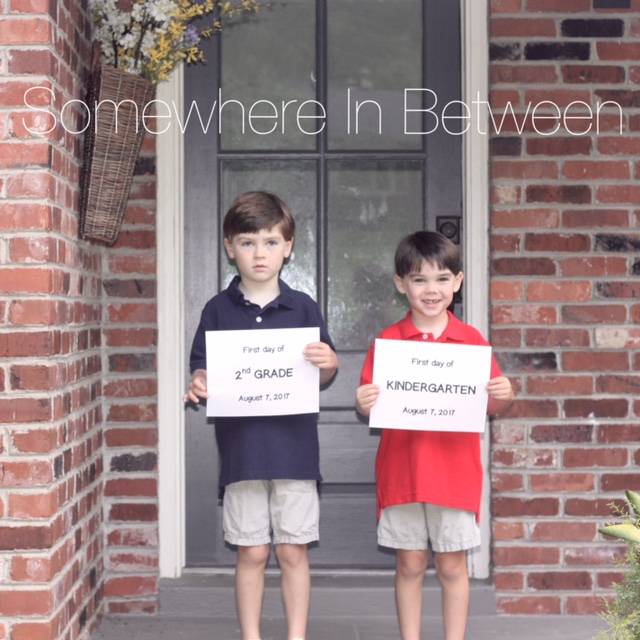 New school years always bring about a slew of emotions and this year was no different.

Miles started Kindergarten and could not have been more excited! This is the first time both boys have ever been at the same school and on the same schedule. It’s pretty exciting for us all, I won’t lie.

While sending my baby to Kindergarten was bittersweet in itself, so was sending Chase to Second Grade. Every year with Chase brings expectations, ideas and dreams that are a little different from most typical kids. The sadness and sting of the “differences” doesn’t hurt as much as it used to, but it’s still there, like a dull aching hangnail that won’t quite heal.

My first Kindergarten experience, with Chase, was completely different than it has been, so far, this year. With him, all I could focus on was IEPs, paras/aids, schedules, food, communication, collaboration, therapies…definitely not the “typical” Kindergarten concerns. As much as I hate to admit this, I couldn’t, or didn’t, have time to worry about volunteering, signing up for class parties and field trips, or which friends were going to be in his class.

Going into this year, with Miles, I knew I needed to step up my game though. He’s a social kid, loves his friends, is eager to learn and wants to be involved in it all. I feel like I’m walking through this experience as a “first-time Kindergarten mom” all over again, on a different playing field.

Walking up to check the class rosters the week before school felt like foreign territory. Excitement over who was in which class felt like a new experience, mostly because I know a lot more of the parents (and their kids) than I did when Chase started Kindergarten, but also because I know Miles cares a lot more than Chase did when it was his turn two years ago.

It’s a weird feeling and hard to put into words, but I feel stuck somewhere between the “neuro-typical” world and the world of Autism and IEPs.

I am thankful, though, that I get to experience both, because I feel as if it gives me a broader view and a deeper sense of gratitude for the things that are most important in school and in life, in general.

While there are always hard times with Chase, ups and downs, roller coasters of emotions; I am thankful for how far he has come and what a large role his school has played in that growth! I’m also thankful for the friends he has made; especially the ones who look out for him, help him in his classrooms, make the effort to sit with him at lunch and play with him on the playground. He has come so far from that first week of Kindergarten, two years ago.

This year, checking that class roster for Chase felt like a new experience as well! For the first time, maybe ever, I knew he would be excited to have certain friends in his class – familiar faces. And teachers who genuinely care about him! I’m excited to see what this school year holds, for both boys, and the all the ways they will learn and grow.

I continue to go back to this verse, in every season of life, as a reminder of who is ultimately in control and guiding our lives. When I find myself worrying or stressing about the future I find comfort in these words…

“I am leading you, step by step, through your life. Hold My hand in trusting dependence, letting me guid you through this day. Your future looks uncertain and feels flimsy – even precarious. That is how it should be. Secret things belong to the Lord, and future things are secret things. When you try to figure out the future, you are grasping at things that are Mine. This, like all forms of worry, is an act of rebellion: doubting My promises to care for you.

Whenever you find yourself worrying about the future, repent and return to Me. I will show you the next step forward, and the one after that, and the one after that. Relax and enjoy the journey in My presence, trusting Me to open up the way before you as you go.”
~ Jesus Calling (Deuteronomy 29:29, Psalm 32:8)